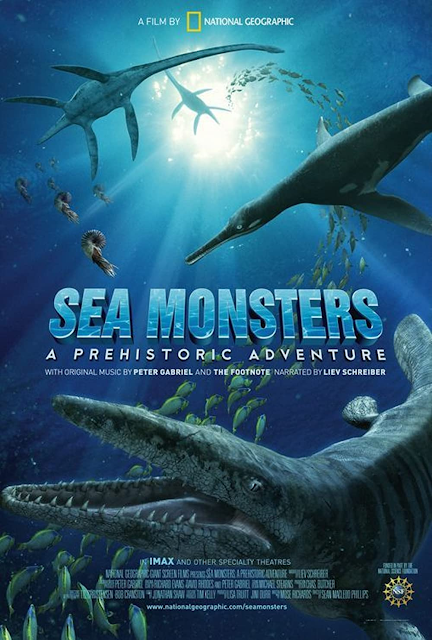 Oh, I'm gonna love this Hello, and welcome back to Aquatober here at Mesozoic Mind. Last time we looked at Sea Rex , a documentary for IMAX theatres in museums. Now we're gonna take a look at... basically the exact same thing. Sea Monsters: A Prehistoric Adventure . Released by National Geographic in 2007, this film is undoubtedly a familiar source of nostalgia, whether its the film, its video game, or the series of videos Nat Geo uploaded. The film chronicles life in the Western Interior Seaway of Late Cretaceous North America through the perspective of a female  Dolichorhynchops ; I believe many have taken to calling her Doly for short and henceforth I shall too. She encounters may other denizens of the sea, including the giant sea lizard the Tylosaurus . The film also has a framing device of scientists uncovering Doly's skeleton. The film to put it in one word, is breathtaking . The visuals are all excellent and top-notch. The animal designs are bright, vivid, and amazin
Post a Comment
Read more 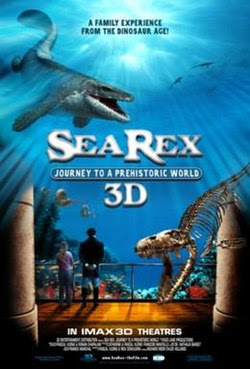 We all have our memories of seeing palaeo-documentaries, whether in theatres. Today we review one such I was obsessed with seeing back in the day, Sea Rex: Journey to a Prehistoric World . We're reviewing it because around the time I wrote this I lately developed an oceanic obsession and watched both this, National Geographic's Sea Monsters (that hopefully will come up later), and listening to Moana songs. The film runs down the history of the Mesozoic's marine reptiles and touches upon the scientific history of them, in particular using Georges Cuvier and the famous Maastricht Mosasaurus hoffmani . Georges himself appears courtesy of Richard Rider in the film's framing device, where he co-hosts with Julie, a woman played by Chloe Hollings (the future voice of Widowmaker) in an aquarium as he explains things to her and audience. Its not clear if he's his ghost or a figment of her imagination, and the film doesn't seem to explain it either way. We get our first
Post a Comment
Location: Mississauga, ON, Canada
Read more 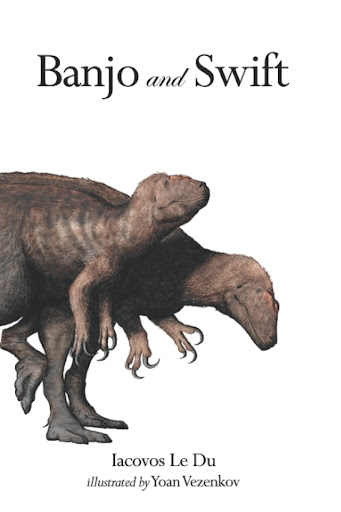 Some time ago, I purchased and got a new book, alongside another one. I don't need to tell you the title based off the book image above and the title of this blog post. Banjo and Swift follows the lives of the titular two male  Australovenators  of the same clutch as they struggle to survive in Mid-Cretaceous Australia, especially after they are forced to go their separate ways when Banjo takes the mate Swift wanted. Swift in particular is the main focus when he moves to the coast, and has to adapt to conditions the pursuit predator isn't used to. In many ways, the best comparison I have for the book is  Dinosaur Planet : both are fictional narratives that follow individual dinosaurs over a period of time. There are even two science chapters adding context to the story, much like Scott Sampson's talking heads in DP.  Another is Robert Bakker's  Raptor Red , also a prose narrative. The fact that I've never read it does not help though, so I won't compare it (but
Post a Comment
Read more 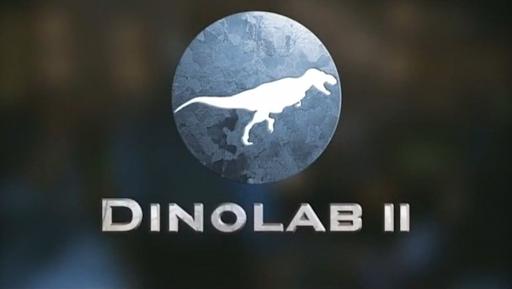 Alright, we're back to our Dino Lab  duology review, with the other half! Dino Lab II aired in 2009, at a time when the dreck of reality shows were slowly trickling in but Discovery was at least a documentary/educational channel proper (not to mention boasts a lot of nostalgia for Generation Z). For the longest time, this was the only one of the two online, whether in separate videos (now taken down) or currently, on Vimeo (link below). https://vimeo.com/264297389 Here, rather then the standard bright light and open lab, we have a much moodily lit and dark lab. We also have original designs for the dinosaurs courtesy of Modus FX instead of reused Meteor models (since they went bankrupt in 2008). Meanwhile, only Hans Larsson returns as a talking head, and he's joined by David C. Evans of the Royal Ontario Museum (my old stomping grounds might I say) and veterinarian Marie-Josee Limoges of the Granby Zoo in southern Quebec, who compares each dinosaur to a modern creature similar
Post a Comment
Location: Mississauga, ON, Canada
Read more 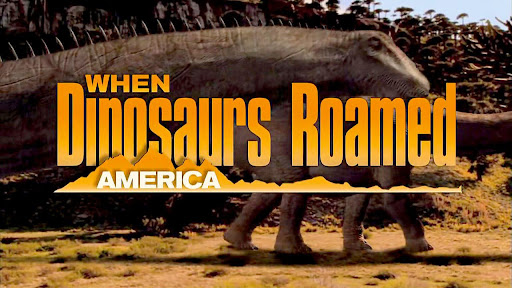 It is in this very week/on this very day that one of the finest documentaries about dinosaurs and put out by the Discovery Channel premiered. For those not in the know, When Dinosaurs Roamed America is a 2001 documentary special depicting a certain country during the Mesozoic era. Much like a certain BBC documentary from two years prior with the initials WWD, its shot as though it were an actual nature doc, focusing on following dinosaurs' daily lives. Its interspersed with cutaways to talking heads discussing crucial context and fossil finds about american dinosaurs and palaeontology. I have many fond memories of the show, seeing it first on Youtube back when you could and not get copyright claimed, whether its the musical score, the memorable and unique sounds, or hilarious . There are five total segments in the show across its 91-minute runtime. There are in order: Triassic New York, where we follow a Coelophysis as it looks for food and nearly avoids becoming food for a rutio
Post a Comment
Location: Mississauga, ON, Canada
Read more 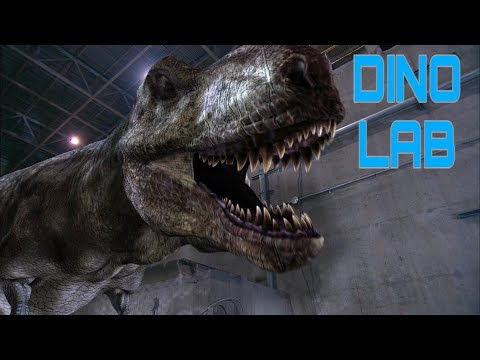 (Note: video provided may have stuff missing from original cut) In 2005 and 2009, two specials aired on the Discovery Channel, back when it was actually about science and documentaries. These were both called called Dino Lab , and they had a rather novel premise: instead of simply being a doc of talking heads with occasional vignettes of prehistoric life or a nature documentary-style presentation with the occasional talking head, the show has a laboratory in which dinosaurs are brought into and put through experiments for scientists to study. Such a premise is pretty interesting, if an unusual one that invites more questions (where did the dinosaurs come from? Why is the T. rex first not at the lab?). The first special, from 2005,had a special place to me, as the first one was one of the first docs I saw as a kid on TV, when I was very young. I remember seeing both a T. rex on a treadmill and a plesiosaur splashing a guy with water. For simplicity’s sake, we’ll start off with it's
Post a Comment
Location: Mississauga, ON, Canada
Read more

Cameron and his Dinosaur Book Review 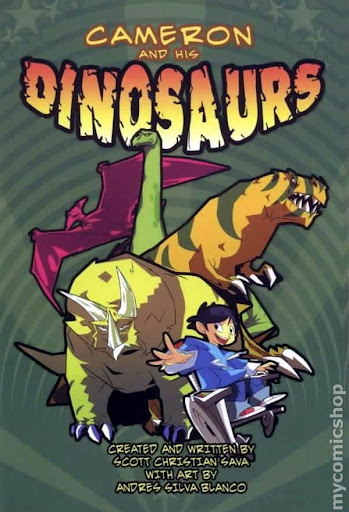 Ahh, childhood memories.... In Middle School, back in the day of the early 2010’s, there was one book in particular I loved to read at the school library. Its name? Cameron and the Dinosaurs, a 2009 graphic novel by Scott Christian Sava. It tells the story of Cameron, a young boy in a wheelchair who encounters four living, talking dinosaurs: Brachiosaurus leader Vinnie, Tyrannosaurus fighter Charlie, Pterodactyl scout Dee Dee, and Triceratops tactician Lizzy. After initially being terrified of them (as you’d expect), he befriends them. However, the evil Professor Pointdexter C. Poppycock and the organisation BURPS (Brotherhood of Universal Revolution for Political Subterfuge), who created the dinosaurs, want to recapture them to take over the world. Its up to the dinosaurs and Cameron to stop them and save the day from them and four evil robots built by Poppycock. Between the premise of dinosaurs, and its unique disabled hero, I was enamoured with it. I had the great fortune through a
Post a Comment
Location: Mississauga, ON, Canada
Read more
More posts